The lowest estimate of the pandemic’s worldwide death toll is twenty one million, in a world with a population less than one-third today’s. That estimate comes from a contemporary study of the disease and newspapers have often cited it since, but it is almost certainly wrong. Epidemiologists today estimate that influenza likely caused at least fifty million deaths worldwide, and possibly as many as one hundred million.

Yet even that number understates the horror of the disease, a horror contained in other data. Normally influenza chiefly kills the elderly and infants, but in the 1918 pandemic roughly half of those who died were young men and women in the prime of their life, in their twenties and thirties. Harvey Cushing, then a brilliant young surgeon who would go on to great fame—and who himself fell desperately ill with influenza and never fully recovered from what was likely a complication—would call these victims “doubly dead in that they died so young.”

– John M. Barry, The Great Influenza: The Story of the Deadliest Pandemic in History

ONE of the obvious boons of this quarantine period is the ample time to get to read a good book and after skimming through a few reviews, Barry’s book showed up on the list. In the To be Read List are Katherine Anne Porter’s Pale Horse, Pale Rider, Daniel Defoe’s Journal of the Plague Year, Richard Preston’s The Hot Zone, Hans Zinsser’s Rats, Lice and History, Robert S. Gottfried’s The Black Death: Natural and Human Disaster in Medieval Europe, and Kim Stanley’s The Years of Rice and Salt.

We are living in COVID-19 times and it is great to draw parallels between our times and the Spanish Flu times. This ambitious 546-page book tells the harrowing tale of how humanity felt helpless in the face of a virus that visited humanity in 1918. People thought it was influenza, only influenza. 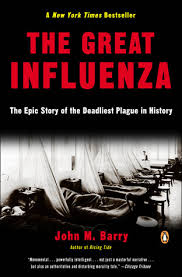 Here are the lessons learnt from the book:

Lesson #1: Are we prepared for the next epidemic?

Barry laboriously traced the evolution  of the US medical research and training leading to the establishment of the Johns Hopkins University. Barry writes:

The Hopkins was to be unlike any other university in America. Aiming almost exclusively at the education of graduate students and the furtherance of science, it was intended by its trustees to rival not Harvard or Yale—neither of them considered worthy of emulation—but the greatest institutions of Europe, and particularly Germany.

Previously, the American medical education did not rival Europe’s. Training in Europe either in France or Germany had the laboratory training component, something which was lacking in the US. Johns Hopkins University was established to change this narrative. And it paid dividends. However, when the influenza struck, the question that was left was whether the world was prepared. Is the world prepared now? The influenza virus continues to mutate but it doesn’t kill much. Scientists still come up with vaccines and every other year or so, the virus keeps mutating. As for COVID-19, was the world ready for it? What lessons did it draw from the 1918 pandemic? How much is allocated for medical research? How well are medical facilities equipped? How is the medical training in the world? Are we prepared for the next epidemic?

Lesson #2: It was influenza, only influenza

Kenya’s Cabinet Secretary Health keeps on saying that if we treat COVID-19 normally, it will treat us abnormally. Barry offers numerous examples of government action that failed to measure up to the seriousness that the influenza deserved. In Philadelphia, a great Liberty Loan parade, despite warnings, happened on September 28, 1918. The parade was designed to sell millions of dollars of war bonds.  It was to be the greatest parade in Philadelphia history, with thousands marching in it and hundreds of thousands expected to watch it.

Several doctors—practicing physicians, public health experts at medical schools, infectious disease experts—urged Krusen to cancel the parade. Howard Anders tried to generate public pressure to stop it, telling newspaper reporters the rally would spread influenza and kill. No newspaper quoted his warning—such a comment might after all hurt morale—so he demanded of at least one editor that the paper print his warning that the rally would bring together “a ready-made inflammable mass for a conflagration.” The editor refused.

Influenza was a disease spread in crowds. “Avoid crowds” was the advice Krusen and the Philadelphia Board of Health gave. To prevent crowding the Philadelphia Rapid Transit Company had just limited the number of passengers in streetcars.

The parade went on. Barry gives a vivid description of that day.

On September 28, marchers in the greatest parade in the city’s history proudly stepped forward. The paraders stretched at least two miles, two miles of bands, flags, Boy Scouts, women’s auxiliaries, marines, sailors, and soldiers. Several hundred thousand people jammed the parade route, crushing against each other to get a better look, the ranks behind shouting encouragement over shoulders and past faces to the brave young men. It was a grand sight indeed.

Krusen had assured them they were in no danger.

And what was the aftermath? Barry further writes:

On October 1, the third day after the parade, the epidemic killed more than one hundred people—117—in a single day. That number would double, triple, quadruple, quintuple, sextuple. Soon the daily death toll from influenza alone would exceed the city’s average weekly death toll from all causes—all illnesses, all accidents, all criminal acts combined.

Not only that. On the single day of October 10, the epidemic alone killed 759 people in Philadelphia. Prior to the outbreak, deaths from all causes—all illnesses, all accidents, all suicides, and all murders—averaged 485 a week.

President Woodrow Wilson gets a heavy indictment in the book for concentrating on the war efforts and not paying attention to the disease. So many soldiers and civilians died in the process. It was influenza, only influenza.

Barry writes, “In the Indian subcontinent alone, it is likely that close to twenty million died, and quite possibly the death toll exceeded that number.”

The word fear appears in the book 94 times. Barry writes:

Like a blanket, fear wrapped itself around people, leaving them too terrified to speak. Yet the media continued lying to them, especially in the US. The anecdote is that the reason why the flu was named the Spanish Influenza is because Spanish media, unlike the US, had freedom. They wrote about this strange disease. So it came to be known as the Spanish influenza not because it originated from Spain but because the media let the people know more about it. A reliable investigation reveals that the flu originated from Haskell County, Kansas, in the US.

There are countless illustrations in the book of how the media either through omissions or commissions, either lied blatantly or never revealed accurate information on what was happening. Barry writes, ” The federal government was giving no guidance that a reasoning person could credit. Few local governments did better. They left a vacuum. Fear filled it.”

Newspapers reported on the disease with the same mixture of truth and half-truth, truth and distortion, truth and lies with which they reported everything else. And no national official ever publicly acknowledged the danger of influenza.

As terrifying as the disease was, the press made it more so. They terrified by making little of it, for what officials and the press said bore no relationship to what people saw and touched and smelled and endured. People could not trust what they read. Uncertainty follows distrust, fear follows uncertainty, and, under conditions such as these, terror follows fear.

So as the COVID-19 pandemic continues to unfurl, the question that the press faces is whether it will give the truth on this pandemic.

More than ever, surveillance and sharing of information on diseases remains one of the most important questions not just in 1918 and previous epidemics but now. The author makes this point in the afterword. A chilling paragraph in the book:

But even if Chinese authorities do change their approach to epidemic disease, even if SARS taught them and other governments around the world the same lesson, the fact that SARS killed people for several months before it attracted WHO’s attention demonstrates the vulnerability of the influenza surveillance system. If the 1918 virus crossed into humans in Haskell County, influenza can cross into man anywhere. Although eighty-two countries participate in WHO’s surveillance effort, more than one hundred do not. One Latin American physician at Tulane University involved in public health warns that at least as late as 1985— and probably later than that—the national medical school of Honduras taught its students that influenza was a bad cold. Those former students now practice medicine with that attitude.

As the pandemic continues to affect the world, these lessons and others can help us in our conversation on this subject. Barry quotes Albert Camus and perhaps this is a good quote to inspire: “What’s true of all the evils in the world is true of plague as well. It helps men to rise above themselves.”