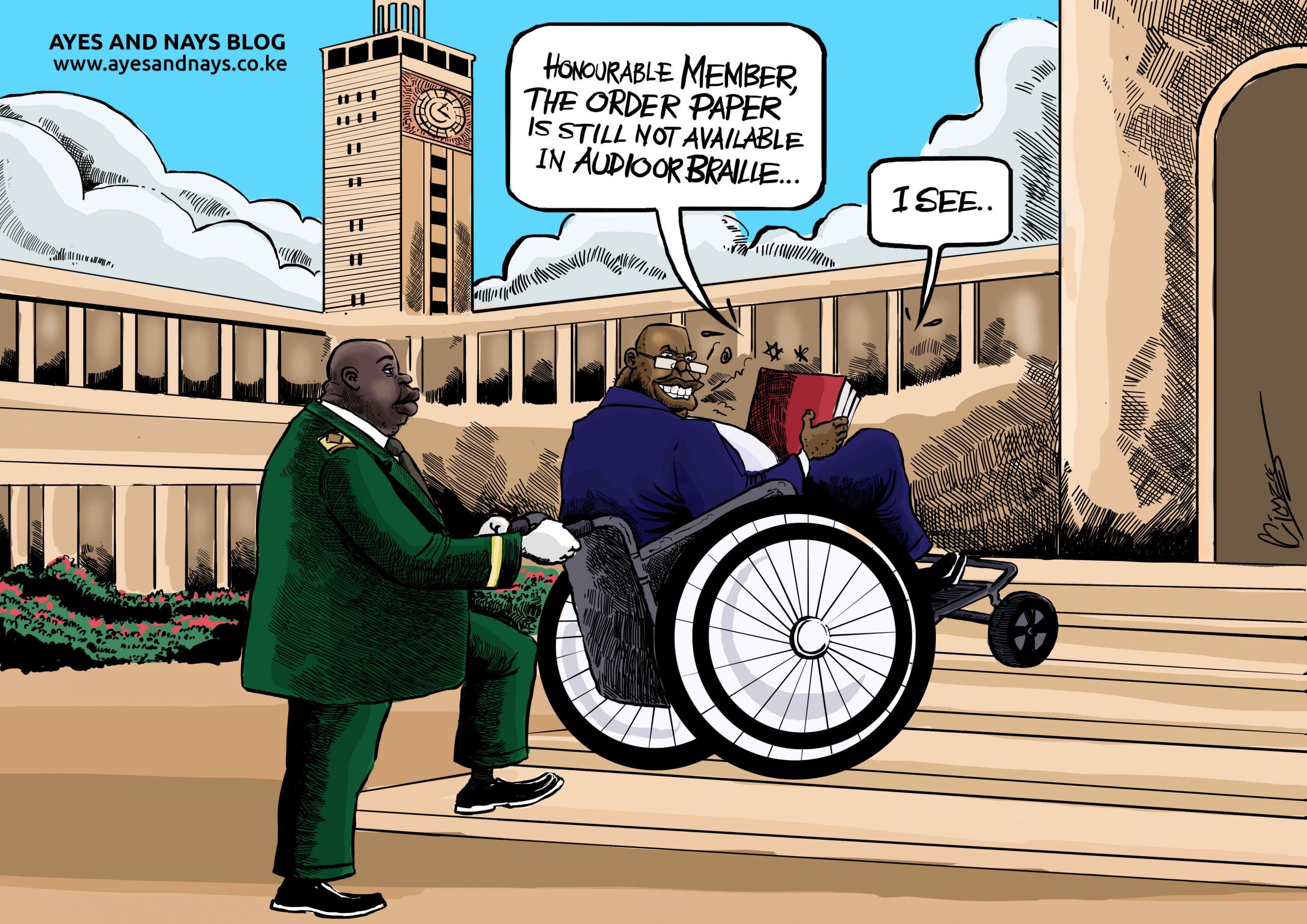 A Member of Parliament who is a wheelchair user disembarks from his vehicle within Parliament precincts. His aide assists him to access the Chamber. The MP has been working on an amendment to the Persons with Disabilities Act to align it to the new realities of a fast-changing modern world. He is due to speak about his bill during the Second Reading this afternoon.

The stairs rising up to the imposing parliament door do not offer an alternative of a ramp for the MP. His aide tries to pull his wheelchair but the stairs are intimidating. He breaks into a sweat but fortunately, a serjeant-at-arms happens to pass by. Both of them lift up the MP in his wheelchair and painstakingly ascend up the stairs and into the reception. The MP, a soft-spoken, intelligent man, has suffered this indignity for several months now.

He enters the Chamber and sits near the entrance because that is the only place his wheelchair can fit. When fellow MPs are “consulting loudly”, he is distracted, – an inconvenience he has suffered because of his sitting position. It is the same thing with the toilets. There is only one hotel outside parliament that he could visit whose washrooms are accessible to him. If he is not early to come to parliament, he is only able to park far within parliament’s precincts because there is no reserved parking area for him. He occasionally attends Committee sittings because the rooms are inaccessible— faulty and narrow elevators, narrow doors, squeezed tables and chairs.

The MPs colleague who is visually impaired has failed to adjust to her role as a Member of Parliament. The Standing Orders are not in Braille. The website does not have an audio facility to listen in to what is in the Order Paper or the Speaker’s Communication. The website is full of useful information which she can’t access. During her induction held a few weeks ago, she was stunned to learn that none of her orientation materials was accessible. No notice within the precincts of parliament is accessible to her. So she wanders about rudderless in a maze of insensitive institution, least facilitated and ill-equipped to the demands of her role as a Member of Parliament.

Here’s a reported story of 1999 from Lancet:

An Irish Member of the European Parliament (MEP) was unable to take his place for the opening session of the new Parliament building in Strasbourg because there was no access for wheelchairs—a contravention of building regulations. Instead, he was forced to sit at the back of the Chamber.

Brian Crowley, who represents the constituency of Munster, made an angry protest when he arrived for the opening of the controversial part-time headquarters on July 20. “I was amazed that I couldn’t get inside the hemicycle [the debating chamber], especially since I met with the planners 2 years ago, before they started building, to discuss the needs of the disabled, such as the gradients for ramps and the width of doors. I was assured there would be full access, as well as a loop audio system for the hard-of-hearing, and braille signs in the lifts.” He also inspected the building 8 months ago and found none of the promised aids was in place, but he was told they would be installed in time for the opening.

Crowley interrupted the opening speeches protesting that “it is absolutely disgraceful when public money has been spent that we can’t give a proper example for the 21st century. What kind of inclusive society does the European Parliament want for the future. I want my heartfelt objections to be heard”, he declared.

The 35-year old MEP was paralysed from the hips down after a 6 m fall when he was 16. The fact that he is the only MEP in a wheelchair does not mean others won’t be elected in the future that “or other MEPs could find they need a wheelchair before the end of their term” noted Crowley. The missing disabled facilities show a “lack of thought and ignorance”, and sends the wrong message about the attitudes towards the disabled, he added.

Crowley says that visitors, such as those who find it difficult to use stairs or escalators, will not feel welcome to what is a public building. His protest, which has been backed by all the MEPs, has raised questions about visitor access and the policy of employing disabled people. Most of the parliamentary sessions are held in Brussels but the Parliament meets for 60 days a year in Strasbourg.

Disability mainstreaming for parliaments is necessary. First, it enables elected and nominated representatives to participate meaningfully in their legislative roles. The barriers placed upon them through inaccessible infrastructure, materials, and work environment are artificial and should be removed to enable them discharge their functions. Staff working in parliament who are PWDs (Persons with Disabilities) will also be able to carry out their duties well if these barriers are removed. Second, parliaments should be accessible to the public. Witnesses and visitors coming to parliament should be able to access ramps if they are wheelchair users, listen to what is contained on the website if they have visual impairments, have a Sign Language Interpreter if they have hearing impairments, not designing slippery floors (or having carpets) to aid those using canes or crutches. In other words, parliaments need to take deliberate steps in ensuring that they are accessible to PWDs.

Buildings within the precincts of parliament should be accessible to PWDs. There should be ramps. Where there are stairs, there should be elevators which are spacious enough and well maintained (or safely still, ramps) which should also have an audio facility and a Braille option. There should be reserved toilets and parking space for PWDs. The Chamber should be deliberately designed to have more spacious seats for wheelchair users at vantage positions and not necessarily at the back. Committee rooms should be disability-friendly.

Parliament’s website should be accessible to PWDs, especially those with visual impairments. Text on the website and documents should also be in audio format. There should be an option for someone to reduce or enlarge text on the website (usually through a – or + sign). Text in plain English is preferable rather than parliamentary jargon.

The Standing Orders or Rules of Procedure of Parliament should be in Braille in order to make it accessible to those with visual impairment. Informational materials either on the website or those given to visitors should also be in Braille.

Policies on PWDs should be streamlines in order to be responsive to the needs of PWDs. Some of the issues that will need to be addressed include clarity on the facilitation of aides or assistants to PWDs within precincts of parliament and outside, provision of assistive devices, facilitation of witnesses who are PWDs, the interlinkage between the medical policy and PWDs, among others.

Parliaments need to ensure that MPs and Staff are continuously educated on inclusive language for PWDs. For instance, it is insensitive to say a disabled person. Instead, say Person with Disability.

Here are some common ones:

Listen to the audio here: