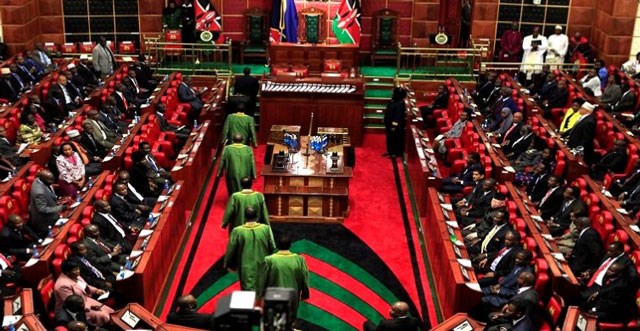 Then when they have done this, they have another stage where they say, we move that the Ball Bill be read a Third Time. Funny, right? And then friends who love Tom would say, we love you Tom, we love your ball while Tom’s enemies would say, Tom, your ball sucks. Well, they don’t say that because that would be termed unparliamentary. So they would politely shout aye or nay.

The law making process in Kenya is just like how you used to make your ball from polythene bags. Your Member of Parliament or Senator would sit down and say, I need to make a ball for myself. Let us call the MP or Senator “Tom”. Tom would reason like this: Our neighbourhood is not fun because we don’t get to play much.; I think my friends and I will have a thrill if we had a ball to kick around and since it is in the village, a ball made from polythene bags would do.

So Tom would go to his dad or mum and say, look, I want to make my own ball; I promise you that I won’t break my leg; Are you fine? Of course dad or mum would think, but we already have a ball in the backyard or your elder brother made one yesterday. But if they are fine, they might say, fine, son, go and make your own ball.

In legislative drafting, this is the letter that the Member writes to the Speaker to formally introduce a legislative proposal.

Now, Tom’s parents know the boys and girls in the neighbourhood who know how to make the ball. So they tell Tom to go to them. They know that the best balls are made from polythene, not papers. They also know the kinds of ropes that tie up nicely. They know how to make the ball round and beautiful. They are known as legislative drafters but they are essentially ball-fixers.

So Tom is led there. Tom might have an idea or two about the kind of a ball he wants but the ball-fixers know how balls are fixed. So they embark on this journey. They go on collecting polythene. Sometimes they might get into one of the rooms in their work station and tell Tom that they have a ball that is exactly like what Tom fancies. They might say things like the balls in the neighbourhood are enough. Or that the ball that Tom wants to make might annoy the son of the Chief who is jealous. But if they set out to make the ball, Tom would have one.

The money guys might say, having that ball around might mean spending more money or they might say, no, we are not spending a shilling here. Tom’s parents will hear of this. And if Tom’s parents get scared, they might say, listen Tom, there is no way you are having this ball; fuel is up, the cost of food is up, forget about it. Or Tom’s parents might be well-off and say, that is fine darling, you can have your ball.

The problem with the money guys, as you can tell, is that they fret about money. But there are other aspects of that polythene ball that might require other people. Things like, what kind of polythene is being used here? Are they durable? Will this ball be much affected if it was played during a windy day?

So there will be another small group of Tom’s mama chama members who would know a thing or two about balls. They might have played in the soccer teams in High School. They might be Harambee Stars fans. They might have played their soccer using the polythene balls while growing up. So these guys would talk about other things about the ball apart from how much it will cost. They will send a word to a few other friends who know stuff about soccer. People like the Attorney-General and the Kenya Law Reform Commission. Afterwards, this group will write a report to Tom’s parents and say, they are fine with the way the ball has been made or that the whole thing should just be tossed to the dustbin or if they have a little mercy they may say that Tom’s parents can keep the ball but tell the ball-fixers to tighten a rope here or add a few polythene there. But Tom’s parents would have the final say.

We are not yet done. We have an interesting turn of events. Tom’s parents’ final word would be that it looks like this polythene ball is something which can turn out to be a ball that can excite the entire village. It appears to be wind-defiant and durable. So Tom’s parents tell Tom, look son, at first we didn’t believe that we could have such a nice ball after all; could we just set a date, get a good microphone and decide on a date where we show up at the trading centre and say we have a nice ball around?

And that is what happens.

Tom’s parents, or probably one of the uncles, climb to the podium and say, look, ladies and gentlemen, here’s a ball, we call it Tom’s Ball; the Ball is about fun here for our children and for connected purposes (well, the uncle does not say that).

Then Tom’s uncle hands over the ball to that chama of Tom’s mama. And tells the group, listen darlings, you got 21 days to tell us if that ball is fit for our little angel Tom and his friends and if you are not happy with the way the ball has been fastened, you need to tell us that.

When those chama members show up after those 21 days, one of them would be holding a report. In the report, they would say, we put up an advert in the newspapers calling out to football fans to tell us what they know about this polythene ball and this is what they said. Some would not tell the difference between a polythene ball and a rugby ball so those members would courteously say, we offered a reasonable opportunity to the members of the public, considered their submissions and we were not persuaded by their proposals. But some would make a lot of sense and this they would consider and say so in their report.

Then there would be a day when the whole village would gather again. Tom’s parents would be there. Tom would be there. Tom would be given the podium to talk about his own ball— why he thinks that it is such a revolutionary idea, how he thinks it will improve the lives of his friends and kill boredom particularly on Saturdays and Sundays. Then the other village members would also talk about the ball. They would say how timely the idea is. They would say that the ball-fixers need to fix the ball well. Of course there would be others who would say, coming up with another ball was plain stupid and that there is need to go beyond coming up with a ball and asking serious questions like, ‘why is there boredom?’ and ‘why is it that there have been balls in other villages yet teenagers still burn schools’ and ‘the village time is limited and we ought to spend it on more serious stuff’. Of course, as you will notice, this is the avenue for ramblings.

Then on a specific day, the chama will introduce those changes. In their jargon, they say moving amendments. And they call this stage the Committee of the whole House. But it is a polite name for the ball repair. They have such confusing language. And it is not just the chama moving the amendments but any villager really. But Tom’s parents are the ones in charge.

Then when they have done this, they have another stage where they say, we move that the Ball Bill be read a Third Time. Funny, right? And then friends who love Tom would say, we love you Tom, we love your ball while Tom’s enemies would say, Tom, your ball sucks. Well, they don’t say that because that would be termed unparliamentary. So they would politely shout aye or nay.

After that, that ball would be taken to the ball-fixers. You remember them? They would be told, the House resolved that the ostrich feathers in the ball be plucked out and that excess air be removed from the ball; do exactly that. After this, the ball would be christened a vellum. It is just a fancy name for that ball but after plucking out the ostrich feathers as resolved by the House.

Then the vellum or the ball would be taken to the one who has the highest authority in the village. This person would just grab a pen and like all football stars sign on the polythene ball and indicate the date. Then the ball would be taken to a shopkeeper somewhere in the village who would get a nice wrapping on the ball. The shopkeeper would have 7 days to get the wrapping on. When does Tom and friends eventually play with the ball? That ink on the polythene ball dries on the fourteenth day. So, they get to kick the ball around from day 14 onward.

Not yet. I haven’t told you about the peculiarities of Tom’s village. Upstream, there are places where they play javelin, badminton, rugby, tennis. So, if Tom wanted to make a tennis ball, Tom and Tom’s parents have to listen to folks from those sides.

But this is a story for another day.

There is also another related audio recording of the law making process in Kiswahili language you can find below: