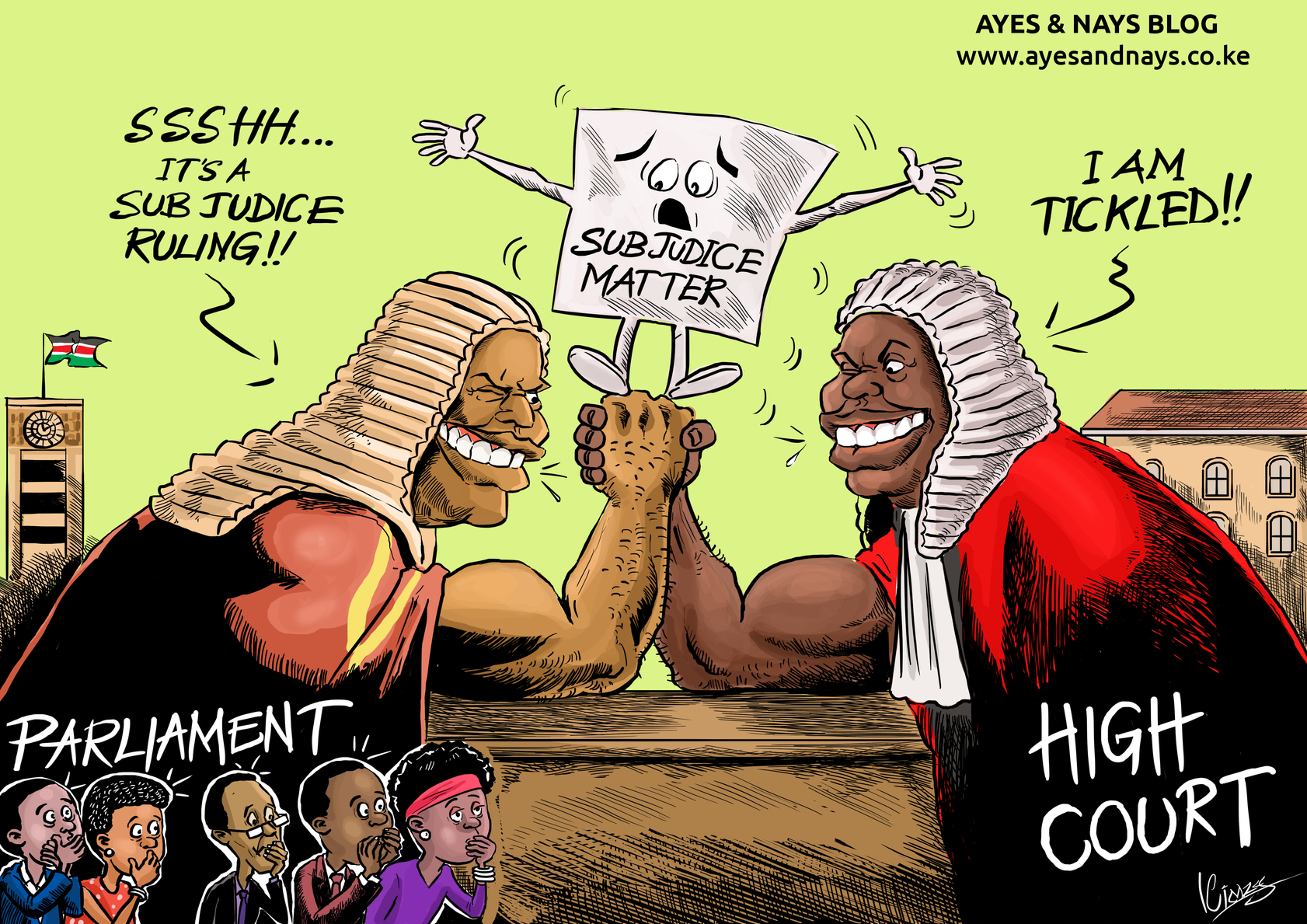 The term sub judice is derived from the Latin phrase adhuc sub judice li est, which means “the matter is still under consideration”. Black’s Law Dictionary further defines the term as “before the Court or Judge for determination”. However, in the context of Parliament, the rule is a voluntarily self-imposed rule on Parliament that is exercised, subject to the discretion of the Chair, with the object of forestalling prejudice of proceedings in the courts.

According to Standing Order 89 of the Kenya’s National Assembly Standing Orders, a matter is sub judice when it refers to active criminal or civil proceedings and the discussion of such matter is likely to prejudice its fair determination.

In Kenya, this rule has been observed since independence and at the inception of the 1st Parliament. On 1st November 1966, Speaker Humphrey Slade stated the following:

(1) No Member shall refer to any particular matter which is sub judice or which, by the operation of any written law, is secret.

(2) A matter shall be considered to be sub judice when it refers to active criminal or civil proceedings and the discussion of such matter is likely to prejudice its fair determination.

(3) In determining whether a criminal or civil proceeding is active, the following shall apply-

(a) criminal proceedings shall be deemed to be active when a charge has been made or a summons to appear has been issued;

(b) criminal proceedings shall be deemed to have ceased to be active when they are concluded by verdict or sentence or discontinuance;

(c) civil proceedings shall be deemed to be active when arrangements for hearing, such as setting down a case for trial, have been made until the proceedings are ended by judgment or discontinuance;

(d) appellate proceedings, whether criminal or civil, shall be deemed to be active from the time when they are commenced by application for leave to appeal or by notice of appeal until the proceedings are ended by judgment or discontinuance.

(4) A Member alleging that a matter is sub judice shall provide evidence to show that paragraphs (2) and (3) are applicable.

(5) Notwithstanding this Standing Order, the Speaker may allow reference to any matter before the House to a Committee.

Below are a few excerpts of Speakers’ rulings on sub judice extracted from Speakers’ Considered Rulings, Guidelines and Orders: National Assembly of Kenya 10th and 11th .Although standing orders for the 10th and 11th. Parliament change, the text on the sub judice rule doesn’t.

In Ruling on Judicial Review: In the Matter of the Electoral Commission of Kenya (ECK) Chairman-Vs-the Attorney General, delivered on November 27, 2008, Speaker Kenneth Otiato Marende said:

Hon. Members, I find it necessary to make some reference to the Sub Judice Rule to be found at Standing Order No.74 of our Standing Orders and its application to the present matter. Standing Orders provide that no Member shall refer to any particular matter which is sub judice or to any matter which is, in its nature, secret. Briefly stated, the essence of this rule is that this House should not debate any matter awaiting the adjudication of a court. To do so, in a manner that anticipates the decision of the court or expresses a view on the merits and demerits of the matter before the court, will be clearly out of order.

In the present case, I am satisfied that the Sub Judice Rule does not apply. What is in issue is the effect on this House of an order that has already been made and that is subsisting. For now, the order is a fait accompli. I am, therefore, satisfied that the House is properly entitled to know how, if at all, its conduct of business is affected by that order.

In a Ruling on Re-appointment of Justice Aaron Ringera as KACC Director, Speaker Kenneth Marende on September 10, 2009 observed:

Hon. Members, the term “sub judice” can be translated loosely from Latin to mean “under judicial consideration”. In the Commonwealth tradition, the sub judice rule arose out of a desire by Parliament to prevent its comment and debate from exerting an influence on courts and thus prejudicing the positions of parties and witnesses in such court proceedings. The doctrine is also premised on the constitutional principle of separation of powers by which Parliament should not be seen as trying to deal with matters that properly belong to the Judiciary. In Kenya, this principle has been observed for a long time. On 1st November 1966, for example, Speaker Humphrey Slade had this to say when a similar matter arose in the House:-

In the same Ruling, Speaker Marende stated that the sub judice rule is one imposed voluntarily by Parliament on itself and is exercised, subject to the discretion of the Chair, with the object of forestalling prejudice of proceedings in the courts. It is important to note that as relates to the National Assembly, the sub judice rule does not find expression in the Constitution or in any other law.

He also indicated that in the House of Commons of the United Kingdom, the sub judice rule provides that matters awaiting the adjudication of a court of law should not be brought forward for debate in the House, but this is subject to the discretion of the Chair and the right of the House to legislate on any matter or to discuss any matters.

It is important to note that the Speaker has allowed discussion on a matter that is sub judice if a matter was considered to be of national importance.

In the same Ruling on Re-appointment of Justice Aaron Ringera as KACC Director, Speaker Kenneth Marende, granted an exception for discussion of the matter although it was in court because of immense public interest. He stated:

I am clear in my mind that in a matter of immense public interest, where there is a doubt, unless sound grounds are advanced, a presumption should exist in favour of allowing debate in the House as opposed to the application of the sub judice rule to suppress debate. I am also clear in my mind that it is not consistent with the purposes for which parliaments are established that at a time of intense public concern over a matter calling into question important constitutional principles and the legitimate inter-play between the Executive and the Legislature on the appointment of the person to superintend the anticorruption machinery in the country, this House should be the only place in Kenya, where the matter cannot be debated. If, however, in the course of debate it should become clear that any Member is clearly foraying into a domain outside what is legitimately the province of this House, it will still remain open for the Chair to call them back to line.

In Sub judice: In the Matter of violation of Labour Laws and Tax Evasion by Bidco Africa Limited, Speaker Justin Muturi ruled on 27th October 2016 that the Departmental Committee on Labour and Social Welfare could only consider the Petition to the extent only of the matters relating to violation of labour laws and not tax evasion which was a matter pending before court.

The National Assembly received a Petition by concerned citizens regarding continued violation of labour laws and tax evasion by Bidco Africa Limited. On Tuesday, 25th October 2016 during the Afternoon sitting, the Member for Kiambu, Hon. Jude Njomo, presented a Public Petition on behalf of former and current employees of Bidco Africa Limited. The Petitioners on whose behalf the Petition was presented prayed that the House—

The Petition was committed to the Departmental Committee on Labour and Social Welfare to consider and report its findings to the House within 60 days in accordance with the Standing Order No. 227(2). However, the Speaker received letters from two law firms, namely Ngatia and Company Associates Advocates and TripleOKLaw Advocates both dated 26th October 2016. The two law firms claimed to act for Bidco Africa Limited which was the subject of the Petition. In their letters, it is contended that the issue of tax evasion for which the intervention of the House has been sought through the Petition is currently before court in two cases, namely, High Court Civil Appeal No.33 of 2016, the parties being the Commissioner of Customs Services vs Bidco Oil Refineries Limited filed on 29th January 2016 and High Court Petition No.217 of 2016, the parties being Okiya Omtatah Okoiti & Another vs Bidco Africa Limited and four others filed on 26th May 2016.

The letters urged the House not to consider the Petition in light of the pending proceedings and further note that Paragraph 11 of the Petition was misleading to the extent that it avers that the issues in respect of which the Petition is made are not pending before any court of law or any constitutional or legal body. Their averment was to the effect that the subject matter of the Petition, in so far as it related to the issue of tax evasion, was sub judice.

The sub judice rule is intended to prevent prejudice to the fair determination of matters in courts. Standing Order 89 outlines how this rule is applied by Kenya’s National Assembly. The various considered rulings by Kenya’s Speakers demonstrate how this rule has been applied over time. One will note Standing Order 89(5). Under paragraph (5),  the Speaker has the discretion to allow a matter which is sub judice (pending before court) to be discussed. In most instances, as we have demonstrated, the Speaker will allow this if a matter of immense public interest.