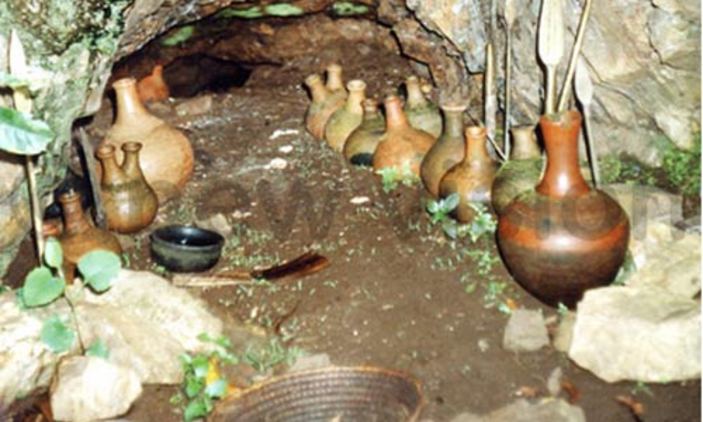 Let us dive in. Seven Acts, seven slabs of fun and a dash of the weird.

This has a respectable title. Lawyers will say ‘Cap 67’. It has been with us since 1925. Where were you in 1925? This is an interesting piece of legislation. Under this law, you are prohibited from pretending to be a witchdoctor. So, you are not allowed to paint yourself with ash, straddle around with scary paraphernalia or even say that you are a mganga from Pemba. If you do, you do 5 years behind bars. And that was as early as 1925. Check out section 2. It reads:

Any person who holds himself out as a witchdoctor able to cause fear, annoyance or injury to another in mind, person or property, or who pretends to exercise any kind of supernatural power, witchcraft, sorcery or enchantment calculated to cause such fear, annoyance or injury, shall be guilty of an offence and liable to imprisonment for a term not exceeding five years.

So, you suspect that I stole your ram and you go to a witchdoctor to ‘verify’ whether I indeed stole your ram. Your purpose? To make me eat grass like those people we watch on telly on their fours in Kakamega. I am sorry, you are not allowed under the Witchcraft Act to do that. You are not allowed, I remind you, to use non-natural means to identify me as a perpetrator. If you do, you can be thrown to jail for 5 years max. And that is it. Read out the full text below. Since lawyers wrote this, you will see some big words like solicits and perpetrator. Here we go:

7. Attempt to discover crime by witchcraft

Any person who employs or solicits any other person to name or indicate by the use of any non-natural means any person as the perpetrator of any alleged crime or other act complained of shall be guilty of an offence and liable to a fine not exceeding five hundred shillings or to imprisonment for a term not exceeding five years.

#2 The Prevention of Cruelty to Animals

Again, to sound educated, you will show off by saying Cap 360 after that title. This law had done a year by the time we secured our independence in 1963. So it has been with us for the longest time. It is a good piece of legislation, so good that it says that if you wish to slaughter your goat for your wageni, you should not chase your goat for the entire breadth of the village while holding your knife. This, the law says, will be “slaughtering the animal in such a manner as to cause it more suffering than is necessary”.

Well, that may not be the best example.

If you have finally wrestled the goat and you descend on its neck, the slaughter has to have the precision of a surgeon. You cannot slaughter the goat with a blunt knife and halfway through, the goat, in throes of death, zigzags around like a bad omen. That would be causing more suffering than necessary.

Also, other goats should not watch you butchering one of their one. You are supposed to either blindfold the other goats or ambush it somewhere behind the homestead while the other goats are swiping their phones and not watching. So be warned because you may be behind bars for 3 months or pay two thousand shillings fine (you laugh about that? Two thousand shillings in 1962 could buy out SportPesa and still have something left to fly out Gor Mahia). Here’s the full provision:

8. Cruel slaughtering of animals an offence

(a) in such a manner as to cause it more suffering than is necessary; or

(b) in the sight of any another animal awaiting slaughter,

shall be guilty of an offence and liable to a fine not exceeding two thousand shillings or to a term of imprisonment not exceeding three months or to both.

(a) that at the time of the alleged offence he was of a religious persuasion that prescribed the slaughter of an animal in the manner in which it was slaughtered; and

(b) that the animal was slaughtered in a place other than a slaughterhouse or abattoir; and

(c) that the animal was slaughtered for private consumption and that the meat of such animal was not the subject of sale, barter or exchange.

We once had this law since 1949 till 2006. If you had your shop in Mombasa, you couldn’t open it on a Sunday. On Saturday, you couldn’t go beyond 12.30 pm. From Monday to Friday, you couldn’t sell in your shop beyond 7 p.m. During public holiday, you could sell but you had to close shop by 11 a.m. Fortunately (or unfortunately) this law was repealed by the Licensing Laws (Repeals and Amendment) Act, No. 17 of 2006. You can check out section 4 below:

(a) no shop shall be kept open, nor may any work be carried on therein, by any shop assistant or journey-man, on a Sunday, nor after twelve-thirty o’clock in the afternoon on one other day in the week, nor after seven o’clock in the evening on any of the other five days in the week; and

(b) no shop shall be kept open, nor may any work be carried on therein, later than eleven o’clock in the morning on a public holiday.

(2) The Minister may, with the advice of the Municipal Council of Mombasa in that behalf and with respect to the whole or part of the Municipality, by order published in the Gazette—

(a) prescribe any shop or class of shops situated in any area which shall close at twelve-thirty o’clock in the afternoon and the day upon which they shall so close;

(b) exempt, subject or not to conditions, any shop or class of shops from the provisions of subsection (1); and

Provided that the total number of hours prescribed for any one day in the case of any shop shall not exceed nine hours.

We used to have such an Act until it was repealed. The Act was to provide for the advancement and control of the pig industry. We even had the Pig Industry Board with the functions of licensing of butchers and bacon factories, advising the then Minister on any matter affecting the pig industry, and the promotion and advancement of the pig industry. Something more. It was an offence to carry on business as a butcher unless one held a current licence from the Board to slaughter pigs. This Act had been around until it was repealed by the Licensing laws (Repeals and Amendments) Act, No. 17 of 2006).

Boy, until its repeal, this Act had been around since 1945. Under the Act, the Minister (of Agriculture) could declare a plant to be a noxious weed. If for instance your land had noxious weed, you had to report that to an inspector or a District Commissioner or to the Director of Agriculture. Not just that. You also had to clear the noxious weed or get someone to clear it. If you failed to do that, you would have committed an offence. This Act was repealed by Agriculture and Food Authority Act, No. 13 of 2013).

This Act is an interesting study. Its long title reads: An Act of Parliament to make provision for the suppression of vagrancy; for the detention of vagrants and for the care and rehabilitation of beggars; and for matters incidental thereto and connected therewith. Let us begin with the definition of the term “vagrant”:

(c) a person wandering abroad, or placing himself in a public place, to beg or gather alms; or

(d) a person offering, pretending or professing to tell fortunes, or using any subtle craft, means or device by palmistry or otherwise to deceive or impose upon any person.

In other words, those chaps sitting at the Jobless Corner near Hilton Hotel under the Act were (are) vagrants. And those prostitutes at Koinange Street would be vagrants too and would not say that they are earning their keep.

Remember that song Karubandika sang by Kasalo Kyanga and Marquis du Zaire (Zembwela)? There is this part of the song that goes:

This song exemplifies what a vagrant under the Act would be. Karubandika would be a vagrant too since he does not have a fixed abode.

What about those beggars begging at the GPO Flyover and near that Roundabout near Holy Family Basilica? Even those would be vagrants too. Under the Act, a police officer would arrest “without warrant arrest any person who is apparently a vagrant or any person whom he suspects upon reasonable grounds of having committed an offence under this Act” (See section 4 of the Act). If a court found that a person was a vagrant and considered that inquiry should be made as to whether that person had committed an offence, that court could order that person to be detained in a place of detention pending the result of that inquiry.

4. (1) (c) if the court finds that person to be a citizen of Kenya who is a vagrant but not a beggar and who has a home, to make an order for that person to be sent to the district in which his home is situated and restricting the movement of that person to that district during a period of three years.

This Act was repealed by Statute Law (Repeals and Miscellaneous Amendment) Act. No. 10 of 1997). How this 1968 legislation lived on for so long till 1997 is one of the mysteries of this life.

Section 192 of the Penal Code is the locus classicus. We were in one of our law classes in 2007 and one of our lecturers, Dr. Ajwang Owuor, mentioned this law. It provides-

Any person who voluntarily vitiates the atmosphere in any place, so as to make it noxious to the health of persons in general dwelling or carrying on business in the neighbourhood or passing along a public way, is guilty of a misdemeanour.

We still have portions of our laws that still use the words “idiots” and “imbeciles”. Section 146 provides as follows—

146. Defilement of idiots or imbeciles

Any person who, knowing a person to be an idiot or imbecile, has or attempts to have unlawful carnal connection with him or her under circumstances not amounting to rape, but which prove that the offender knew at the time of the commission of the offence that the person was an idiot or imbecile, is guilty of a felony and is liable to imprisonment with hard labour for fourteen years.

What other laws in Kenya or elsewhere in the world do you find weird or ridiculous? We would be happy to know.